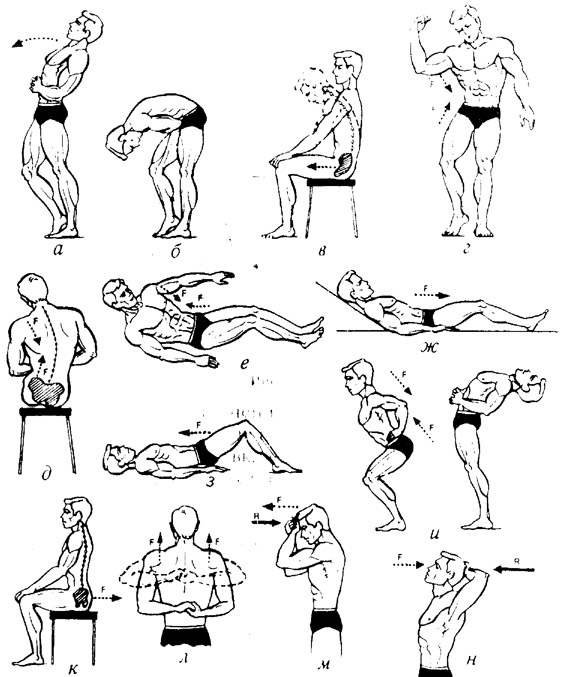 Types of exercises and rules for their proper performance.

In order to obtain the best training effects, such exercises should be used, which – taking into account the characteristics of the increased features of the muscular system – they give the greatest guarantees of achieving the assumed goal.

Most of the movements performed by an athlete, in terms of the functioning of the muscular and nervous systems, the goal is to develop as much power as possible, and the muscles work comprehensively as "muscle bands", driving biokinematic chains. As far as increasing strength, muscle mass or local strength endurance of individual muscle groups is generally recognized as the correct procedure, however, increasing the power of individual muscle groups in an isolated manner does not seem to be a viable solution. It will be more advantageous to use such exercises, in which the power will be developed by the muscles driving the biokinematic chain "lower limbs-torso-upper limbs", so, as it occurs in most movements performed by an athlete.

Guided primarily by the needs of training practice, it is worth distinguishing at least three types of exercises, which athletes should use.

Global exercises – comprehensively engaging the muscles of the whole body and making it possible to perform movement as quickly as possible in the full range, i.e.. "to end", without having to inhibit the movement of antagonist muscles too early. This group of exercises is especially useful in increasing the strength of the muscles of both the entire body, and parts of it (e.g.. lower limbs and torso, or the upper limbs and torso). They should be done as soon as possible, regardless of the size of the load being covered. Global exercises – except for natural plyometric exercises, i.e.. gears, jumps and throws medicine balls - intended for adult athletes (completed process of growth of the skeletal system to length), who should previously systematically use isolated and segmented exercises, preparing their bone-joint and muscular systems to act as dynamic as possible while overcoming external resistance.

Isolated exercises – involving individual muscle groups. These exercises should be performed in standard positions, which limit the influence of others - except those exercised – muscle groups. It is recommended to perform them very carefully and to gradually increase the overcome load. These exercises are especially useful in the stages of increasing local strength endurance, muscle mass and strength.

The way the exercise is performed is very important. Increasing local strength endurance, just like lean muscle, requires calm, exact, to the full extent (emphasizing the beginning and end of the movement) perform the exercise. Accuracy is the goal, control of muscle tone and range of motion, not the speed of the exercise. When we use exercise to increase muscle strength, beyond accuracy and concentration, it is important to emphasize the rapid development of strength, i.e.. "Quick" start of movement (the so-called. quick start). This method makes it possible to increase both the maximum force, and the speed of developing strength (RFD -ang. rate of force development), indispensable feature in sport. Increasing power, it is the fastest way to perform the movement in its full range – the size of the lifted weight determines the speed of movement achieved – ideally without the antagonist muscles "inhibiting movement" too early, i.e.. as fast as possible "to the end". During the training, whose purpose is to increase power, athlete tries to overcome resistance (mainly the weight of equipment or your own body) as soon as possible!

The main factors justifying the desirability of dividing into "strength" and "power" exercises are the specificity of the above-mentioned features (each of them requires a different procedure) and stages in their development. It is not recommended to simultaneously develop local strength endurance, muscle mass, strength and power. Power should be increased on the "base" of force, strength based on strength endurance, and not the other way around.

Principles of performing the exercises

Girls and boys must be educated to achieve the greatest possible training effects, and then consistently following the "iron" rules of proper exercise by adult athletes. The most important of them are listed below.

1. Do the exercise in this position, which allows the maximum involvement of these muscles, you want to develop!

2. Use as little as possible in the series of exercises, but an effective weight!

3. Perform each repetition in a series of exercises as carefully as possible, the goal is to move correctly, adjust the weight to it!

4. Concentrate on what you are doing, try to do your best!

5. Make every move carefully (accentuate the beginning and end of the movement, avoid "tricks")!

6. Try to choose the right weight, but when in doubt, better lift too small than too big!

7. Increase the weights you lift, when you are planning fewer repetitions in a series of exercises!

8. Move with these muscles, you want to develop through the exercise, other off ("Block")!

10. Determine the breathing rhythm that is best for you (recommended: lifting – exhaust, lowering – inspiration) and use it in every repetition!