In order to objectify the practical activity of the trainers, it was decided to use a carefully selected battery of general physical fitness tests, with scientifically proven validity, reliability and differentiating value.

The choice was not easy and therefore it becomes necessary to substantiate the proposed solutions.

There are numerous batteries of tests that check the level of physical fitness. Some of them are age specific, like for example. tests for preschool children, for schoolchildren, for adults, old people. Some are adapted to a medical diagnosis, e.g.. movement tests used in therapeutic rehabilitation or working capacity tests, recommended by cardiologists, or assessment of joint flexibility used in rheumatology, e.t.c. Many tests are designed to assess general physical fitness, and for the assessment of directed or special fitness, the most famous are the sports fitness tests developed by the former Scientific Institute of Physical Culture.. Because, if we want to choose a test or test batteries to be used in practice, we have to decide first, what we want to evaluate and for whom the movement tests are to be intended.

In Poland, in the last two decades, two batteries assessing the general physical fitness of young people have become popular. It is an International Physical Fitness Test consisting of eight movement tests and a European test, abbreviated as EUROFIT.

For the International Test battery, we have developed Polish standards in the form of 100-point tables (Stefan Pilicz, Ryszard Przewęda, Janusz Dobosz and Sylwia Nowacka-Dobosz). At EUROFIT, we have also developed up-to-date frames of reference in the form of percentile grids (Romuald Stupnicki, Ryszard Przewęda, Katarzyna Milde). However, for practitioners of physical education and sports, using percentiles is more difficult, than using scoring tables.

In addition, two tests on the EUROFIT battery are questionable, namely the balance test and endurance pendulum run in the section 20 m with increasing running pace dictated from the tape recorder. First of all, the attempt to balance is too difficult for children in the first years of school (99% students are not able to do it), second, it has a discontinuous rating: if the tested person did not make the test, he gets 0, if the first time – gets 1, if the second – gets 2, if for the third – gets 3, etc., that is, the evaluation starts with the worst, then it is at its best and it gradually deteriorates. Shuttle run on the section 20 m raises methodological reservations, because the respondent may recognize himself, that he or she is already very tired or the tester can make such a decision based on subjective perceptions (e.g.. he notices the reddening of the face). This is admittedly an alternative attempt, because this test can be replaced by the PWC-170 test, but a cycloergometer is needed for the PWC-170 test, which in practice complicates its implementation.

The disadvantage of EUROFIT battery testing is this, that most of them are skewed, i.e.. group results are not normally distributed (Gaussian curve). This disadvantage in individual measurements is irrelevant, however, if we want to assess group fitness on the basis of EUROFIT tests, for the calculation of the arithmetic mean, or other statistical operations, we need to apply additional treatments, like for example. logarithm.

Taking into account the above-mentioned inconvenience, International Test batteries are most often used in practice, especially, that it is more commonly known in our country. Whereas the Council of Europe, to which Poland has belonged for over a dozen years, recommends (this is a suggestion – not a warrant), to use EUROFIT, because this test was developed by the Council of Europe's Sports Development Committee („Council of Europę, Committee for the Development of Sport”) and he promotes his achievements.

We suggest, however, for practical reasons, to stick to the International Test (technically easier to carry out, clearer when diagnosing and forecasting).

This physical fitness test is recommended for people aged from 6 do 32 years. Individual tests require quite a lot of effort, and therefore people undergoing them should be healthy and properly prepared in terms of endurance.

2) long jump from the spot;

a) hanging on bent arms – girls of all ages and boys up to 11 years;

b) pull-ups while hanging on the bar – boys aged 12 and more years;

The test should be performed within two days. On the first day, the fitness status of the trials should be assessed: 1, 2 and 3. In second day – other attempts (4-8). Or, you can run all trials in one day in the order given, with this however, that try 3 (endurance run) should be done last.

Equipment and aids: timers, pistol or other starting device, flags to mark the starting and finishing places.

Manner of execution: on the command "to your places", the subject stands still in front of the starting line in a stepping position (the so-called. high start). He runs out of the signal and travels the designated distance at the highest speed.

Score: with two gears measured with an accuracy to 1/10 s the better time matters.

Comments: The signal to take off may be a shot from the starting pistol or some other signal, clearly visible to timekeepers. Several subjects may run at the same time, but then each must have a separate timekeeper. The treadmill should be well prepared and properly marked. Atmospheric conditions – without excessive wind and temperature extremes. 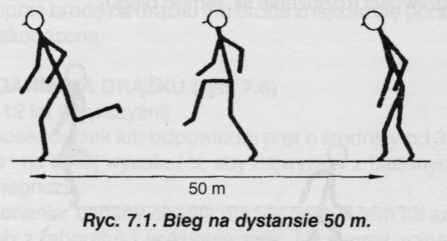