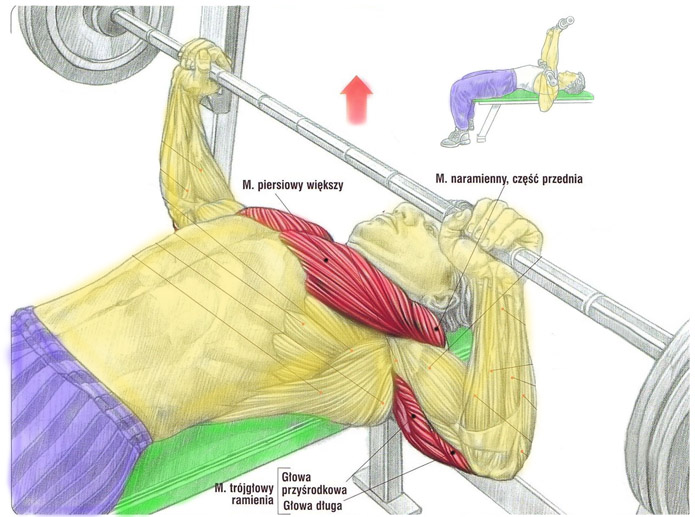 10 "Golden Exercises" aimed at increasing the strength of the main muscle groups.

We recommend 10 exercise, selected for 16-17 year old girls and boys (supplemented with variants recommended for older ones, i.e.. 18-19-summer, athletes), the use of which allows to increase the strength of the muscles of the entire body. At these stages of the training process, the mentioned exercises should be used by representatives of these disciplines and sports competitions, in which muscle strength and / or power have a significant impact on achieving high sports results.

1. Chest and arms – Pressing the load while lying on the back on a horizontal bench.

2. Ridge-top – Raising your arms to the side while lying front on the bench (or gymnastic box).

Raising your arms to the side in the forward drop (forehead resting on a bench or hips resting against a wall, legs bent at the knee joints).

3. Belly-down-Raising the bent legs towards the body while lying backwards on the mattress (or in the front support on the forearms – position in atlas devices).

Variants for the elderly

Raising the bent legs towards the body while lying on the back on a sloping bench.

Raising bent legs towards the torso, hanging on ladders or a bar.

4. Ridge-down- Front lifting on the mattress (a roller under the abdomen to increase intra-abdominal pressure and prevent the worsening of lumbar lordosis).

Raising the torso to a horizontal lying on a gymnastic box or a high bench (roller under the belly).

5. Thigh-front – Straighten your legs in the knee joints both in a supine position or with one leg in a sitting position.

Straightening the legs ("Stuffing" the load on both sides) in the sitting position – horizontally (position in atlas devices) or up-slant (gantry).

6. Chest and arms – Squeezing the lever forward in the sitting position.

Adduction of the elbows (arms bent at the elbows) horizontally in front of the chest (the so-called. butterfly) in the sitting position.

7. Ridge-top – Pulling the bar of the upper lift at the front (to the chest) in the sitting position (or kneeling down).

Variants for the elderly

Pulling down the upper lift bar at the back (to the nape of the neck) in the sitting position (or kneeling down).

Pulling the bar of the upper lift alternately at the front (to the chest) and behind (to the nape of the neck) in the sitting position (or kneeling down).

Pulling the lower lift stick to the abdomen in the sitting position.

Pull-ups on the stick with undergrip or overgrip (you can use the help of an exercising person, which supports the legs of the pull-up).

8. Belly-up – Raising the torso to the bent legs with a twist on the mattress (feet on the ground or supported on ladders) – full range of torso motion, i.e.. from lying on your back to drawing your chest against your thighs).

Raising the torso to bent legs with a twist on a slope bench – full range of torso motion.

9. Ridge-down – Raising the legs to a horizontal lying face down on a chest or a high bench.

Pulling down the lower lift bar with straight arms to the stomach (from bending forward to lying on the back).

10. Thigh-back – Bending the legs at the knee joints both in the front lying position or one leg in the standing position (position in the atlas).

You should choose the weights in particular exercises very carefully (better too small than too big!). We do not forget, that the health and safety of exercisers are the most important!